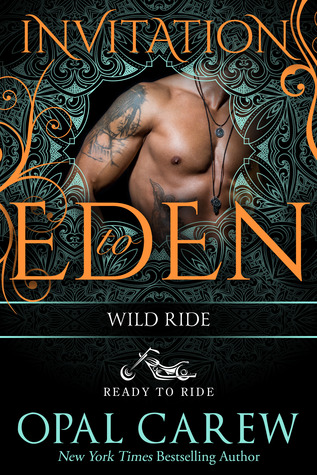 Her friend told her dreams come true at Eden, but this is more like a nightmare.

Marissa is shaken when her bad-assed biker ex-boyfriend begins to stalk her. The solution? Take a trip far away to an exclusive resort called Eden with her friend.

But even in paradise, she can’t escape the man from her past. As he’s closing in on her, a passing stranger on a motorcycle pulls up and orders her to get on his bike. For some reason she trusts him, and does as he says.

Now the chase is on. Her knight in supple leather knows how to ride and they manage to lose her ex. For now. But soon, Marissa wonders if she’s jumped from the frying pan into the fire as she clings to the tough, tattooed man who saved her. All she knows for sure is — it’s going to be one Wild Ride!

Paradise becomes a nightmare that turns to sexual bliss. A Wild Ride!

Marissa’s life has her on edge when that elusive invitation to Eden arrives. Indulging in paradise and a fantasy or two, has become a heart pounding ride that hangs on the edge of danger and pleasure.

Killer is overpowering, intimidating and dangerous. He’s also so flippin hot, you can’t help to melt.  When the damsel in distress has a little more spunk and imagination, Killer finds she’s an addiction he can’t be without.

Opal Carew never fails to give the read on hot book. Add in the temptation that the Invitation to Eden series is known for. This one’s a scorcher! With a few added surprises from the Ready to Ride crew that will make the temperature rise. As the danger fades to pleasure, the ride just gets better.