ARC: At Last by Melissa Schroeder 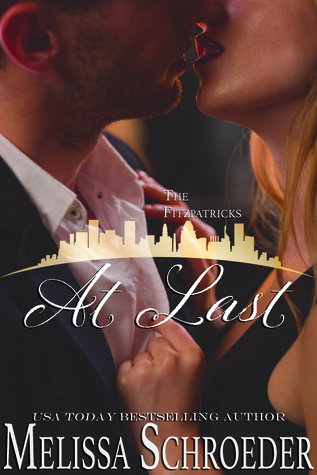 A woman who gets under his skin.

Aeden Fitzpatrick has been annoyed by his sister’s best friend for as long as he could remember. She is snooty and a know it all, and he just doesn’t like her that much. Of course, it doesn’t keep him from fantasizing about her, or getting irrationally angry because she dates so many men. That all changes the night of his sister’s wedding. One night and he is hooked. But Wendy has obligations so he will just have to wait.

Wendy has always assumed she would never fall in love. She had made sure to date the kind of men who knew the score. Her childhood had proven to her that she was unloveable and she refused to take that from a man. Aeden changes all of that in one long, amazing night. Now, six months later, she’s not sure what will happen, but she knows she’s in love.

Wendy returns to find out she is a local celebrity but she could care less. All she wants is to return to work and figure out what is going on with Aeden. Their courtship isn’t without it’s bumps in the road. Their chemistry in bed doesn’t help deal with their conflicting personalities. But when an obsessed fan starts to stalk Wendy, Aeden realizes that he doesn’t want to live without her in his life. When the stalking turns sinister, the lovers must fight for everything they hold dear…including their lives

Wendy is snarky and sassy. A woman who gives a bit of her heart in everything she does. However her dysfunctional upbringing has left her view of relationships hollow. As an honorary member of the Fitzpatrick’s, Wendy learned what having a real family is like.
Aeden is cocky and all alpha. A man who daily puts his life on the line to others safe. He too has an different view when it comes to relationships. He’s devoted to his friends and family.
Aeden and Wendy have been building a long burning tension for years. At her best friends wedding it becomes known she’s leaving for six months. In a moment of real life, prior thoughts and opinions were changed in the blink of an eye. One night left a never ending memory, gracing each other’s thoughts daily.
Wendy and Aeden are the definition of two people that were meant to be together. Her independence and his cockiness have created a sexual tension that is explosive. Their interactions with each other bring out the best of both of their personalities. Aeden and Wendy are both strong characters with charisma and depth. They complement each other in the best ways.
Melissa Schroeder’s AT LAST is sassy and sexy. The Fitzpatricks are going to give the Santinis competition.