← Review: Falling for the Girl Next Door by Melissa Schroeder
Review: When Sparks Fly by Helena Hunting → 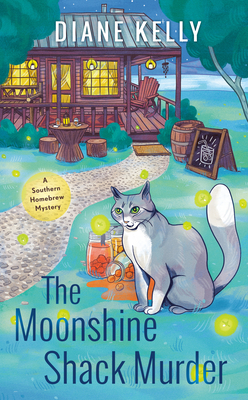 The Hayes family has made moonshine in Chattanooga since the days of Prohibition, and Hattie is happy to continue the tradition, serving up fun, fruity flavors in mason jars for locals and tourists alike. All signs indicate her new ‘shine shop will be a smashing success. What’s more, mounted police officer Marlon Landers has taken a shine to Hattie. For the first time ever, the stars seemed to have aligned in both her work and romantic life. But when a body ends up on her store’s doorstep alongside a broken jar of her Firefly Moonshine, it just might be lights out for her fledgling business.

The homicide detective can’t seem to identify the person who killed the owner of a nearby bar. The only witness is Hattie’s longhaired gray cat, and Smoky isn’t talking. When the detective learns that the victim and Hattie had a heated exchange shortly before his murder, she becomes her prime suspect.

Lest Hattie end up behind bars like her bootlegging great-grandfather a century before, she must distill the evidence herself and serve the killer a swift shot of justice.

Mystery and humor combined in one. You can’t ask for a better combination and a cozy mystery. The Moonshie Shack Murder is a great start to what I think is going to be an intriguing and humorous cozy mystery series.

Hattie Hayes is carrying on a long family tradition. She’s just doing it the legal way. Hence, The Moonshine Shack! Hattie is thrilled to be sharing her grandpa tradition shine along with her flavorful line of shine. During her grand opening party Hattie believes she has a local pub convinced to sell her shine but later backs out and just a bit later is found dead. On Hattie’s doorstep not less. And with a jar of her shine smashed on the ground next to him. To clear her name and save her reputation before it could even really start Hattie Puts her nose to the grindstone to distill the true culprit.

What a great start to a new series. Diane Kelly definitely has something special with this one. I love the family legacy being revived in a new way. The characters are amazing. Grandpa was a hoot. He was thoroughly entertaining every moment he was on the page. Whether he was strapping himself to his rocking chair or getting rowdy with the young folk he’s a true gem in the story. Hattie is still coming into her own and beginning to let her dreams flourish but she still has a lot to learn. Her determination and tenacity just makes you love her.

A little mystery, a little shine and a dash of romance, that a winner in my book.

← Review: Falling for the Girl Next Door by Melissa Schroeder
Review: When Sparks Fly by Helena Hunting →