← ARC Review: For His Eyes Only by Lexi Blake
Promo: Wolf in her Soul by N.J. Walters → 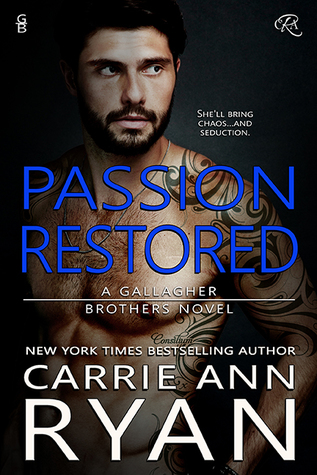 The Gallagher Brothers series from NYT Bestselling Author Carrie Ann Ryan continues with the one brother who thinks he can handle it all and the one woman who could change that.

Owen Gallagher likes everything in its place and is organized to a fault. While his brothers have each dealt with their own personal tragedies and stresses, Owen figures he’s had it pretty easy. That is until his perfectly ordered world is rocked at its foundation and he’s forced to rely on others. Now, he must heal his body and his soul while trying to ignore his delectable and utterly off-limits neighbor.

Liz McKinley is stressed out, exhausted, and not in the mood for a bearded and growly man in her ER. When she patches him up to the best of his ability, she’s prepared to push him firmly from her thoughts. Of course, that would be easier if she and her best friend hadn’t bought the house next to his. Now their paths seem to cross daily, and she is finding it harder and harder to say no to the injured and angry man next door. But she’s been scarred one too many times in her life, and even though this Gallagher looks good enough to eat, she knows that sometimes, sating that craving is the worst thing she can do.

4 Stars
Owen is my new book boyfriend. I totally fell for this overly organized, sexy, caring and a little geeky man. How could I not love a man that has a thing for post it. He’s dedicated and loyal. Owen likes a woman in jeans, is amazing good with his hands and has a huge heart.
Liz is one complex cookie. She’s strong, smart, incredibly hard working and always giving herself. However relationships are something altogether different. Liz has many layers, making her an interesting and deep character.
Liz and Owen are amazing together. They experience an instant attraction, share intense chemistry and creative a passion all their own. Owen is a wonderfully patient man while Liz battles to peel away some of those layers of hers. Passion Restored was a very intense emotional read for me. Liz and Owen very easily captured the hearts of readers.
Carrie Ann Ryan never fails to deliver a book that makes your feel, is sexy as all get out and gives a lot of heart. Passion Restored, is a different type of book for Ms. Ryan that this reader believes showcase her talent beautifully.
A copy of this title was provided for review.

← ARC Review: For His Eyes Only by Lexi Blake
Promo: Wolf in her Soul by N.J. Walters →