← Carian Cole’s Storm-Blog Tour with Giveaway!
Review: The Space Between by Kate Canterbary → 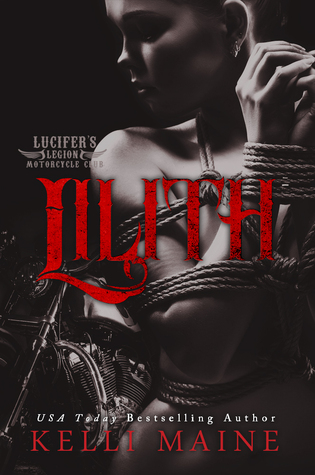 Who am I?
I’m every woman’s worst nightmare.
A taker of lives.
A trainer of slaves.
You can call me Lucifer.

Luc “Lucifer” Bontrager is a nomad in Lucifer’s Legion Motorcycle Club. Traveling chapter to chapter, he brings in big money kidnapping women, training them and selling them as sex slaves. He’s heartless, brutal and all business.
And then he meets his match.

Lilith. Every man’s worst nightmare. A taker of lives. A sociopath on the run.

Inked up with satanic symbols and verses, she’s fearless and completely insane. Luc can’t train her, he sure as hell can’t sell her, and—for the first time in his life—he can’t bring himself to put a bullet in the bitch’s head either.

Her words and cold, calculating eyes haunt him. She’s the devil on his shoulder, reminding him of all his sins. He should’ve killed her when he had the chance, because when the unthinkable happens and Luc falls for the young, innocent girl he’s training, Lilith seeks her revenge, targeting the only girl he’s ever wanted to keep as his own.

Luc “Lucifer” Bontrager is the textbook version of a Dr. Jekyll and Mr. Hyde. He’s pretty much an asshole all the time.  Then there will be these moments that its  like a light shines through making something about this monster  into someone almost beautiful.   Then you take a breath and realize he is straight from hell.

Lilith is like the total psycho Spawn of Satan. Crazy and proud of it.  I don’t even think I can put words to this woman. And the sad thing is I really don’t know which of the two of the was the worst.

This book is not for the faint of heart. It is truly a messed up story with messed up situations and severely messed up people. Somehow I could not put the damn thing down. The author gives the reader a warning at the beginning of this book, the morning was very accurate. Somehow I got very intrigued by these characters enough to keep turning the page and learning the story. Again it’s not pretty, I wouldn’t call it entertaining.  However something about it made me want to keep reading.

This title is from my personal library.

← Carian Cole’s Storm-Blog Tour with Giveaway!
Review: The Space Between by Kate Canterbary →