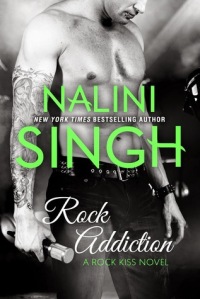 A bad boy wrapped in a sexy, muscled, grown-up package might be worth a little risk…

Molly Webster has always followed the rules. After an ugly scandal tore apart her childhood and made her the focus of the media’s harsh spotlight, she vowed to live an ordinary life. No fame. No impropriety. No pain. Then she meets Zachary Fox, a tattooed bad boy rocker with a voice like whiskey and sin, and a touch that could become an addiction.

A one-night stand with the hottest rock star on the planet, that’s all it was meant to be…

Fox promises scorching heat and dangerous pleasure, coaxing Molly to extend their one-night stand into a one-month fling. After that, he’ll be gone forever, his life never again intersecting with her own. Sex and sin and sensual indulgence, all with an expiration date. No ties, no regrets. Too late, Molly realizes it isn’t only her body that’s become addicted to Fox, but her heart…

Being a fan of Rockstar romance, readers know there are only so many ways the story can go. For me, rock romance is indulging in the personalities of the characters and how the music is encompassed into the story.  Rock Addiction, first book of Nalini Singh’s new series, goes beyond the cover and gets inside the complexities that come from being in the spotlight.

Lust and emotions over load when Molly takes lead singer Fox, up on the one in a million chance. An independent woman with a past that rattles her to the core more so than not.  Intoxicated by the man and not just the star, indulging in Fox surfaces the past causing her to question and gear what could be. I enjoyed Molly, giving into fantasy through her off. Deep and intelligent, dating a rich Rockstar is way out of the box for her.
Fox, larger than life rocker, has an equally unforgiving past.  He work his way to the top. Now he’s a guy who is still in love with his music but can get what he wants. I think love at first sight is an understatement for what Fox instantly feel for Molly. He rocks that girls world in more ways that one. Ways that would have caught this gal too!  Sensitive, sexy and dominating this tattooed singer will make his way into your heart.

I never thought I would say I liked , yet loved a New Adult book. Ms. Singh made me do just that with ROCK ADDICTION!  Highly intense on emotion and passion with some drama thrown in, made this book a page turner. Well written characters, blazing passion and a blood deep love of music expertly woven together to set Ms. Singh’s new series off with an amazing start.  Rock romance done right!

I was given this ebook from the author/publisher via netgalley for an honest review.