Review: One Way Back to Me by Carrie Ann Ryan 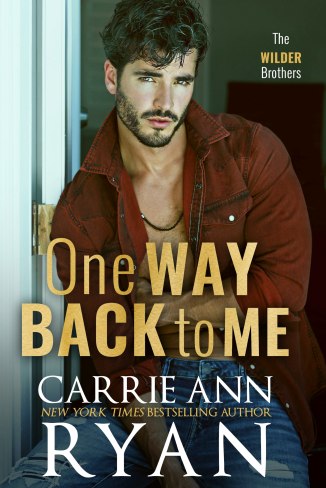 One Way Back to Me

Paperback
Expected publication: April 18th 2022
The Wilder brothers have retired from the military and as they’re forced to learn a new life, things get interesting fast in this kickoff to a brand new steamy, contemporary romance series from NYT Bestselling Author Carrie Ann Ryan.

One dance at a stranger’s wedding. That’s all it took for me to fall for Alexis.
And then? Disaster. Another man—her boyfriend—gets down on one knee and proposes to her.
I never thought I’d see her again.
Years later, I’m in desperate need of a wedding planner—not for myself, but for my company.
My five brothers and I need to get our new Wilder Resort off the ground, and Alexis is the only one savvy enough to help us.
But there’s the little matter that I still have it bad for her. Alexis has changed since the night we met. She’s gun shy. But there’s a spark between us that will not die. We both fight it, until we don’t.
Until history repeats itself. The same guy who took her away from me is back to do more damage. But this time he’ll have to go through me to get her.

Talk about chemistry and attraction making not one but two people stop in their tracks. A simple dance was all Eli needed to know that this beautiful stranger was the one for him.  Life cut him hard with that his stranger was proposed to only minutes later.

Fast forward two years and things have changed a bit. Eli and his brothers are holding down their Resort. A band of military brothers running a resort may seem comical to some but The way I read it it was like therapy with alpha therapy to them. All recently leaving their respective services for one reason or another each one is on a very different path and finding his own way. Eli is constantly worrying as to whether he talked to his brothers into making the right choice for their futures. Finding themselves in need of a wedding planner for their resort, a blast from the past walks into Eli’s life, rekindling that spark all over again.

Alexis has been burned. Newly divorced and having her life taken from under her she is starting over. Trying to re-establish her name and reputation as a wedding planner, A friend sent her to a new resort looking for someone with her talent.

Walking into her interview at Wilder resort she lays her eyes on someone she didn’t think she’d say again. That spark of passion and chemistry once again ignites feelings all within her. Alexis sees this as a new beginning as long as the pass stays in the past.

I really enjoyed the introduction to the Wilder Brothers in One Way Back to Me. Eli and Alexis complement each other so well. They both had some baggage but I loved how they were able to work through their issues and come together as one. Eli is a workaholic but yet loyal and dedicated. Alexis is extremely sweet and amazingly talented. The two of them together are a force to be reckoned with. We meet each of the five brothers and learn that they have issues as well. With each of them just getting out of the service they are in a very different place mentally.  Their actions prove that they are devoted and loyal to their family however each is holding something to themselves that we will have to wait and see unfold in future books. Carrie Ann Ryan gives us another group of brothers to get all swoony over.