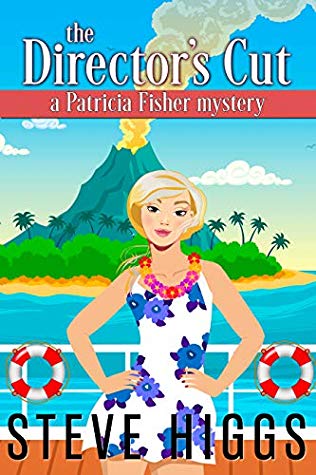 She’s over fifty, overweight, and in way over her head!

It’s well known that working in movies can be cutthroat, but no one expected that to be taken literally.

It’s party time on board the Aurelia! On the LA to Hawaii leg, a Hollywood film crew are shooting scenes for a new action movie and Barbie has been given a bit-part role. It’s all great fun and Patricia isn’t surprised when her cute, blonde friend attracts the attention of the handsome A-lister male lead.

But when he is found murdered in the upper deck pool and the killer leaves a message saying Barbie is next, it falls to Patricia to work out who the killer is.

With her trusted butler, Jermaine, good friend, Barbie, and lame-duck Shane Sussmann, an odd-looking film extra she befriended, Patricia will have plenty of help as she unravels the truth. The prime suspect has an ironclad alibi though and there is definitely something going on with the film’s beautiful female lead.

Will there be more bodies? Will the new deputy captain be of assistance this time? Will Jermaine be able to serve tea at four o’clock?

It’s going to take more than luck to solve this one. Can she survive The Director’s Cut?

A cutthroat, conniving, hiding in the shadows kind of mystery filled with humor and entertainment.

Director’s Cut is the third installment of the Patricia Fisher mysteries. On this leg, from Los Angeles to Hawaii, a film crew hops on board bringing excitement and murder. Patty along with her faithful butler, Jermaine and her best friend on the ship Barbie, get caught up in a hot mess of Hollywood proportions.

Patty is such a wonderful character. Starting life over on an around the world cruise is definitely the way to do it. Patty is observant, resourceful and willing to bend the rules just a little bit.  I love how she has befriended her Butler, Jermaine and allows him to dote on her even though she doesn’t feel she deserves it and Barbie. Her exercise obsessed friend, who lends a hand in many of the humorous parts of this novel.  The characters are as lively as they are lovely.  There’s lots of personality flowing right alongside the mystery of The Director’s Cut.

Director’s Cut is a fast paced, ever twisting plot, fun cozy read. The turns will keep readers guessing themselves throughout the entire read. Patty is smart and lively even if she jumps the gun from time to time.  She may not be a professional when it comes to solving crime, however she does quite a good job at figuring it out. From the interaction to the characters down to the who done it, The Director’s Cut Will keep you fully entertained.  I had the pleasure of enjoying the Director’s Cut as an audiobook. Narrator Katherine Anderson is amazing. She brings Patty to life with flair and charisma. Ms. Anderson’s performance earned an extra star on my review of this title.

Comments Off on Audio Review: The Director’s Cut by Steve Higgs