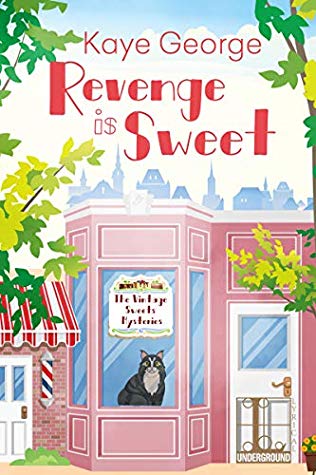 In the picturesque tourist town of Fredericksburg, Texas, Tally Holt has opened a new candy store with a vintage twist . . .but there’s no sugar-coating a nasty case of murder . . .

Tally Holt has poured her heart, soul, and bank account into Tally’s Olde Tyme Sweets, specializing in her grandmother’s delicious recipes. Tally’s homemade Mallomars, Twinkies, fudges, and taffy are a hit with visiting tourists—and with Yolanda Bella, the flamboyant owner of Bella’s Baskets next door. But both shops encounter a sour surprise when local handyman Gene Faust is found dead in Tally’s kitchen, stabbed with Yolanda’s scissors.

The mayor’s adopted son, Gene was a handsome Casanova with a bad habit of borrowing money from the women he wooed. It’s a sticky situation for Yolanda, who was one of his marks. There are plenty of other likely culprits among Fredericksburg’s female population, and even among Gene’s family. But unless Tally can figure out who finally had their fill of Gene’s sweet-talking ways, Yolanda—and both their fledgling businesses—may be destined for a bitter end . . .

From the sweets of the old time candy store to Nigel, the main coon cat, to the way the mystery unfolded, Revenge is Sweet is a promising start to this new series.

Kaye George will definitely make your mouth water with all the wonderful confections that Tally Holt creates. She will also get your mind churning with mystery that is contained within Revenge is Sweet. Tally and Yolanda are a trip together. You can tell they are still finding their way, but they both have potential. With that said, there are many Aspects of the story that I thoroughly enjoyed. I love this little town. The descriptions of the confections are truly mouthwatering. There’s a lot of personality lying just under the surface that I felt needs to pop out a little bit more. Like the characters I mentioned above I feel this series has a lot of potential. We just had it for you shortcomings along the way. Revenge is Sweet is a good start to what could be a pretty awesome and yummy series.