“It’s a new show, Quirks and Kinks. We’ve already selected a male reenactment actor to be your co-host, so you’re the last piece of the puzzle. There’s some seriously f@$%ed up sh*t out there that people are into, and the two of you are going to be the face of it.”

“I’m going to be the face of people’s freakish fetishes?” I asked disbelievingly.

Larry shrugged his nonchalance, shoving it directly down the throat of my panic. “Half of it.”

That conversation was the beginning of more than a show.

It was the beginning of mystery, friendship, and love, and the outcome of mixing all three together with two unsuspecting victims.

Easie Reynolds and Anderson Evans were drawn to the same, simple thing—each other.But, sometimes, undeniable chemistry isn’t enough. After all, how easy is it to get know someone when they’re constantly pretending to be someone else? 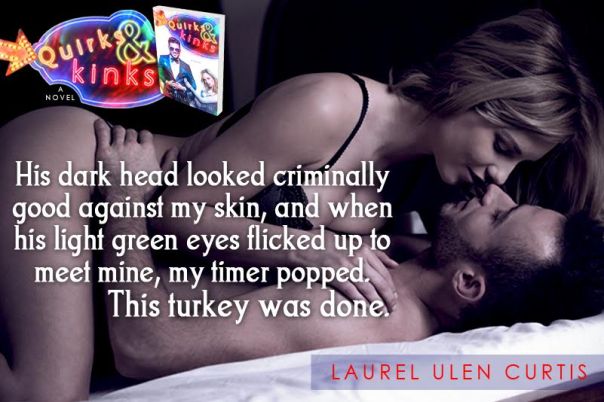 “I’m still not even sure what we’re doing here,” I told Ashley as I glanced around at the cheap Tex Mex themed decor of El Loco Restaurant.

All around us, business-suit-clad, young singles chatted and laughed, sinking deeper into their margaritas and each other. A life untraveled stared me in the face, but it didn’t make me feel bitter or regretful. All I felt was stupid for being out and spending money that we didn’t have.

“You just landed a job,” she cooed before sipping delicately from the free water.

Giving her my undivided attention, I narrowed my cat-like blue eyes.

“Granted, it’s not a job you’re exactly thrilled about, but it comes with money, and that’s worth celebrating a little.”

“Pff,” I huffed. “So far, all it’s come with is a bag of muffin mix and humiliation.” Exaggeratedly, I checked my purse. “Nope, no money.”

My fingers itched for a cigarette, and astute twenty-three year old lady that she was, Ashley didn’t miss it.

“Besides, if we’re going to get on the money discussion you’re going to have to take a closer look at some of your other expensive habits.”

Ashley had been trying to talk me into quitting for years, and I knew my lungs would thank me if I somehow managed to follow through. But for as desirable as it sounded, I just…couldn’t. It wasn’t so much the addiction and the work it would take to kick a years-in-the-making habit. It was that smoking had become my emotional crutch. My timeout in any moment of need and my excuse to busy myself with something other than being a bitch. I was scared of the chasm I’d fall into, the unclimbable hill I’d create with my auger-like anxiety.

My sister didn’t know any of that. No one did.

“I smoke for my career.”

Her eyes practically rolled all the way out of her head. “This ought to be good.”

“You know this industry is unbelievably vapid, and vapid means skinny. Smoking keeps me that way.”

She shook her head in disdain.

“And it’s cheaper than a gym membership.”

“Global warming, anyone?” she called dramatically. “You’re argument is balancing on some pretty thin ice.”

Suddenly, warmth wafted up into my face as our waiter shoved the toasty basket of complimentary chips into the center of our table. My eyes drifted naturally from the basket to the hand holding it, where a large, oval, heavy metal ring sat in blazing contrast to the tan expanse of his long ring finger, up the line of his muscular—deliciously veiny—forearm, to the cuff of his rolled up black sleeve. On a runaway mission of their own, my eyes wouldn’t stop, eating up the expanse of his bicep in an instant, stutter-stepping up the corded column of his slender throat, and landing on one of the most attractive male mugs I’ve ever seen.

A mixing bowl of ethnicity, his naturally tanned skin and dark features stood in stark contrast with the minty green of his eyes. Directly on me and smirking, they were mesmerizing.

Ashley spoke, as I’d apparently lost all of my normal snarky ability.

A small glance from me to her preceded his polite answer. “You’re welcome.”

She smiled her prettiest smile, the one that infused her entire being from chest to eyes, and the corner of his mouth notched higher in response.

A foreign heaviness settled in my chest as I watched, and its completely unwelcome presence nearly made me sick.

He turned to leave slowly, one last lingering look in my direction making my nerves ratchet up to an eleven.

Fuck. I did not like to be rattled. Confident words were my modus operandi, but a good earthquake could wreck even the strongest of routines. My table at El Loco, tonight—this guy—was the epicenter.

The man in question had just earned himself automatic placement on my shit list.

“You’re, like, really attractive,” Ashley noted, evidently drunk on her water and speaking via a direct link to my brain.

I would have laughed at Ashley’s assumption and how ridiculous it was if I hadn’t been thinking the same thing.

He looked slightly bashful, but fought straight through the discomfort and answered her frankly. “Uh, yeah. I mean, I’m trying anyway. I’m not particularly successful.”

Distracted by my reaction to him and his honesty, I didn’t run a pre-check on anything coming out of my mouth. Not that I normally had the best filter. “So you’re another one of those actors, waiting tables to pay the bills and pass the time?”

He bristled, and rightfully so. But he did it with an otherworldly calm, meeting my eyes directly and speaking in a soft, polite—if only slightly teasing—voice.

My cheeks felt hot with embarrassment and shame, and the glint in his eyes told me that he saw it.

Sometimes I hated that my default setting was bitch. Such a dominant trait was hard to overturn. “Okay, so maybe that was a little rude.”

One corner of his mouth—the smug one—rose just slightly. “It’s a distinct possibility.”

Silence hung between us, but while my time was spent avoiding eye contact, his was spent calculating his next blow.

“I guess you must be something really impressive then?”

“Huh?” My wandering eyes shot to his with the focus of a heat-seeking missile.

“Well, you obviously aren’t on the waiting tables slash acting track that the rest of us losers are.”

“I mean, you must do something that really matters, right? Educating orphaned kids. Curing Cancer. Coming up with the way to end all of the world’s unrest.” Attractive arms crossed over an equally nice chest. “Am I right?”

For as confident as I usually was, and as many comebacks as I normally had, I couldn’t think of one single thing to say.

Unfortunately, my sister wasn’t suffering from a similar problem.

“Hah! She’s an actor too. But she’s too busy to wait tables.”

“Working?” he asked, one manly eyebrow cocking in time with his question. If I wasn’t mistaken, he actually looked impressed for a minute.

I was ready to leave right then, but Ashley, being the one of us with a conscience, had a knack for ruining a good thing.

“Oh. No. She’s just too busy being her. You know, cutting people like you down in her spare time.” She looked away, bopped to the music in the background. “But, she doesn’t do it on purpose. She was born this way. Cold, dead heart and all. I guess that’s why people like me still love her.”

I tried not to let her words hurt. After all, if I were describing myself, I probably would have chosen the exact same words, and because I knew her so well, I knew she was just trying to make a joke and bail me out of a situation of my own making.

And yet, I still couldn’t stop the smile from slipping and sliding its way off of my face.

It only took a few seconds to recover, but when I looked back up at the waiter, he was looking at me differently. Assessing.

Uncomfortable was too cushy a word for what I was feeling. Bombs exploded and sprayed shrapnel, the sharp edges of his scrutiny digging into the flesh of my muscle and making it twitch just beneath the not-protective-enough layer of my skin.

A crazy, hot mess that I couldn’t stop reading.

Easie is like a bomb waiting to go off. She’s got a foul mouth, hard to work with and straight up a bitch.  A tough LA girl. I don’t think anyone other than her sister knows who Easie really is.

Anderson is the jack of all traits when it comes to entertainment to the outside world. Handsome and kind, this singer, actor, and athlete, is just too good to be true. Also a busy man. Anderson’s drive to do all this amazing things is another story in itself.

Sarcasm, raw emotions and crazy humor made Quirks and Kinks a book I couldn’t put down. Anderson and Easie really rocked the foundations of each other’s world.  A real roller coaster ride in this one.  I was busting out laughing one moment and ready scream at others.  Laurel Ulen Curtis gave both the lead characters very dynamic personalities that sucked you into the book and didn’t stop until the end. A very different book that what I expected!

Laurel Ulen Curtis is a 27 year old mother of one. She lives with her husband and son (and cat and two fish!) in New Jersey, but grew up all over the United States. She graduated from Rutgers University in 2009 with a Bachelor of Science in Meteorology, and puts that to almost