Review: More Than Protect You by Shayla Black 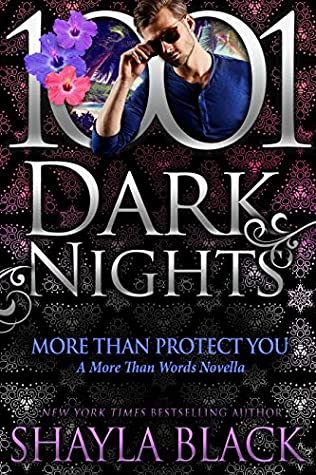 More Than Protect You

Can I keep the gorgeous, gun-shy single mother safe—and prove I’m the man for her?

I’m Tanner Kirk—Certified firearms instructor and mixed martial arts enthusiast. When I filed for divorce at the end of an empty marriage, all I wanted was a vacation in paradise, not another woman in my life. But how can I possibly say no to Amanda Lund, a young single mom desperate to learn self-defense? Or refuse the banked desire on the guarded beauty’s face?

So I seduce Mandy until we’re burning up the sheets…and soon find my heart entangled with her bruised and battered one. But when a nemesis from her past tries to destroy our future by unearthing my secret, will she understand and forgive me—or give up on us forever?

**Every 1001 Dark Nights novella is a standalone story. For new readers, it’s an introduction to an author’s world. And for fans, it’s a bonus book in the author’s series. We hope you’ll enjoy each one as much as we do.**

4 Stars
Tanner doesn’t think twice when he’s asked to protect a woman and her young son. The moment he lays eyes on her he knows, deep in his soul he’s done. The man is about to sign final divorce papers, is not doing the love thing and is now caught between the need to protect her and attraction and chemistry that is pulling Amanda to him in every way.
Amanda is on the run. Trying to move on with life for herself and her son yet a threat is still right on her tail. Crossing an ocean should give her a safety net but soon realizes that’s a no go. When help is called in it tips Amanda world in a whole different way. The safety of herself and son are on the line, yet there’s an incredible pull to someone she hardly knows.
Tanner and Amanda’s story is a fast, slap you in the face, ya that just happened kind of story. On the move, tension rising, emotions blaring, Amanda and Tanner form a connection that can’t be fought or forgotten. It’s insta-love but it’s not. Their connection and chemistry found a way through the fears and secrets. Can a few days really be enough or will the secrets of the past taint the future? Tanner and Amanda is a ride but one with a happy ending.

Charity Edwards has never been a woman who liked to compromise–not at work and definitely not in her personal life. So, when TJ Callahan appears on the scene as their FBI liaison, she decides to take a chance on the slow talking Texan.

TJ doesn’t like undercover work, but thanks to an old case, he has been tasked to do just that. He uses his position to infiltrate TFH to investigate Charity, a woman well-known for her hacking skills. His almost instant attraction he has to Charity makes it impossible not to blur the lines and he soon finds himself falling for the impossible woman.

When his assignment is revealed, Charity wants nothing to do with him, but she has no choice. Thanks to TJ’s investigation, Charity’s life is in jeopardy and he will do anything to protect her–even if it means sacrificing himself.

Charity is a live in the moment, intelligent and caring woman. Fun and straightforward. A geek through and through.  She’s a fun spitfire, that you want on your side.  TJ was born into geekdom, making him destined for the life.   He’s kind of quiet, laid back and good at what he does.  He’s caring and kind with just enough alpha to make you more than want him.
A suspense plot that keeps your brain moving with chemistry and personality that keeps you moving through the pages. Constant Craving shines with what Melissa does best.  Characters with depth and quirks that make the read fun along with the suspense. Steamy passion and amazing chemistry that make the pages sizzle. Constant Craving is everything that I love about Melissa’s work. She draws you in, keeps you there, and makes you want more. Along with trying to figure out a way to life the good life in Hawaii.

Constant Craving like the other books in the Task Force Hawaii series is my new favorite of Melissa’s work.

An advanced reader’s copy was provided for an honest review.