Review: The Cure for What Ales You by Ellie Alexander 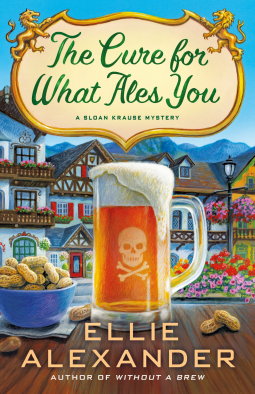 The Cure for What Ales You

Amateur sleuth and brewer Sloan Krause contends with her past–and a murder related to it–in The Cure for What Ales You, another delightful mystery from cozy writer Ellie Alexander.

After a long cold winter, spring is beginning to bloom in the alpine village of Leavenworth, Washington, where craft brewer Sloan Krause and her partner in crime Garrett Strong are putting the finishing touches on their bright and refreshing Lemon Kiss ale. They’ll be debuting their new line at the Maifest celebration, which will bring visitors from near and far to dance around the Maipole and shop at the outdoor flower markets.

Despite the festive spirit in the air, Sloan is brewing over her past. She’s spent months following leads that have turned into dead ends. But when she spots a woman who strongly resembles Marianne—a long lost contact who may be her only connection to piecing together her story—she hopes that things might be taking a turn in her favor. That hope is quickly smashed when Marianne is involved in the murder of a local housekeeper. To make matters worse, Marianne issues a dire warning that Sloan and her entire family are in danger. If Sloan can’t figure out who the killer is and what happened in her past, she won’t find any hoppy endings.

It’s Mailfest in the charming and cozy town of Leavenworth! Sloane and the crew of Nitro are eager to start slinging pints of their newest craft beer, Lemon Kiss for the town festivities. Ready for a busy but fun weekend Sloane gets wrapped in more than beer and brats.  The woman from past that Sloane has been looking for shows up at the festival, a local housekeeper is murdered and now she and Alex are in danger too.  Sloane does why she does best….. brews and clues!!!

Wow! What a powerhouse of a story with The Cure for What Ales You.  Ellie Alexander is a Fascinating writer and it definitely shows within the story. Sloane has done a lot of growing over the last few months and learning to live life a new way. Also trying to find out who she is. A lot of those questions are answered in this almost double mystery.  Sloane never gives up or in and has become a stronger person for it.  The Cure for What Ales You is fun and festive, a well plotted mystery and long time fans will have some long time questions answered.  A very entertaining cozy.