Review: Without a Brew by Ellie Alexander 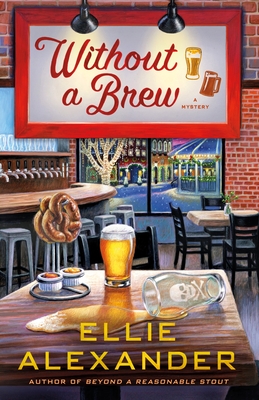 Amateur sleuth Sloan Krause delves into a murderous winter wonderland in another delightful mystery from cozy writer Ellie Alexander, Without a Brew.

It’s winter in the Bavarian village of Leavenworth, Washington, which for local brewmaster Sloan Krause means lots of layers, pine and citrus-flavored craft beers, and getting the new guest rooms at Nitro into pristine condition before visitors flood in for IceFest—a local tradition filled with fireworks, ice carving, and winter games of all varieties. But Sloan and her boss Garrett quickly learn that being brewkeepers turned innkeepers may not be as idyllic as it sounded.

While one couple staying with them seems completely smitten, a flashy group arrives in the evening demanding rooms. Sloan and Garrett are less than impressed, but agree to rent to them anyway. The night takes a turn when brewery patron Liv Paxton finishes her frothy pint and, with no previous plan for an overnight stay in Leavenworth, eagerly takes Sloan up on the offer of sanctuary from the snow—until she has a strange run in with some locals and the other guests. Sloan could be imagining things, but when Liv’s room is found trashed the next morning, a hateful message painted on her car, and Liv herself is nowhere to be found, Sloan is convinced another mystery is brewing. With many of the potential suspects hunkering down under Nitro’s roof, she knows her co-workers and friends won’t be safe until she serves up the killer a hoppy pint of justice.

Without a Brew is a fun and unique cozy mystery that really makes you want to try a craft beer. Even for a non beer drinker.

Without a Brew is my first Sloan Krause and will not be my last. The Bavarian Village Ice festival is all but underway and Nitro is doing a soft open for their B&B tasting experience! Sloan and her boss Garrett learn quickly that innkeeping and beer brewing may not go hand in hand. Nitro’s soft open turns into a full house when a small group has a messed up reservation and a lone woman seek shelter from the cold. Fun in the snow and amazing beer tasting is what should be had but when a body turns up things are not as they seem. Too many suspects and a lot of unanswered questions layer this mystery. Sloan weaves her way through a trail of clues she seems compelled to follow.

Without a Brew was a fantastic cozy mystery. I really enjoyed Sloan‘s character. She’s hard-working and independent. A caring and loyal woman who has seen a hard life. Her heart has been broken by someone she loved but yet she’s picking up the pieces and trying to live on with life. She did a lot of growing in just one book and I find that thoroughly impressive on the authors part. As someone who is just picking up a book within the series and able to understand the challenges that Sloan faces and understand them like they were just introduced in this book is a higher accomplishment in my book. The mystery was interesting and impressive how it came about and with the end results were. I also thoroughly enjoyed this little town. As someone who really doesn’t like the cold or beer for that matter I found both aspects of this book to be truly Intercal parts of the story and we’re interesting to someone who has not found an interest before.

Without a Brew was a page turning mystery that was completely entertaining and thoroughly enjoyed. I can’t wait to go back to the beginning of the series and find out all the wonderful things I’ve missed about this incredibly charming and cozy little town.