Review: Southern Sass and a Crispy Corpse by Kate Young 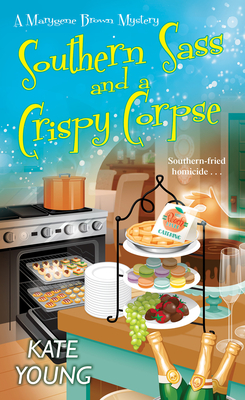 Southern Sass and a Crispy Corpse

On Georgia’s picturesque Peach Cove Island, a killer is serving up a two-for-one special . . .

After their mama’s passing, Marygene Brown returned to Peach Cove Island to help her sister Jena Lynn run the family diner, renowned for its homemade peach desserts. But Mama is never too far away–her sassy spirit haunts the island, and more specifically Marygene. Lately Mama has been warning her that the dead will seek her out to solve their murders, an idea Marygene is far from peachy keen on.

But that prophecy appears to be coming true when she goes skinny-dipping off the island and swims right into a woman’s charred corpse floating in the waves. And when Marygene and her brother Sam come upon a second burned bodSoury in a wine cellar at an event they’re catering, it appears they have a double homicide on their hands. It soon turns out the victims have more in common than their charred remains, and Marygene will need to double down to find a killer who has no aversion to playing with fire. Good thing Mama has her back . . .

A highly enjoyable small town cozy with a paranormal twist.

Marygene Brown is a strong woman, who has seen and been through a lot. She has returned home to take her place in the family business while the ghost of her mother guides her in an unknown family legacy. Still feeling the effects of a divorce and settling into a new way of life Marygene takes on the task of helping departed spirits pass on and bring justice to the crimes committed upon them. Willingly or not.

It’s one thing to stumble upon a body while swimming in the ocean but stumbling upon another while doing your job makes you think a bit harder. Marygene finds herself right in the middle of a decades-long mystery. With two dead bodies, her father being the local law, a new officer that she can’t quite figure out in the spirits of those departed knocking on her door, while reluctant when it comes to the spirit side Marygene proves to be a fantastic amateur sleuth in her own unique way. She learns Quickly that the little town she lives in has more secrets than she could’ve known.

Southern Sass and a Crispy Corpse is a fun and unique cozy mystery. Marygene and her sister Jena Lynn are a fun and entertaining pair. Along with Eddie(father), good friend Besty who is hysterical, the cast of characters alone are entertaining. The story is filled with southern charm and a lot of sass. The mystery has some twists that definitely keep you thinking yet add to the entertainment value of the story. Kate Young made a fan of me with just one read.