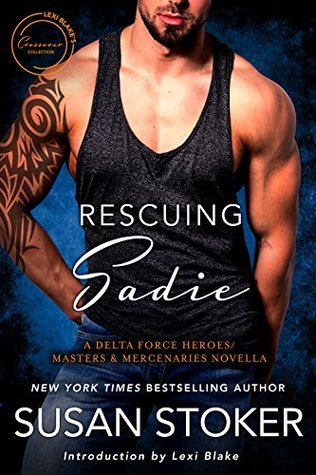 Sadie Jennings was used to being protected. As the niece of Sean Taggart, and the receptionist at McKay-Taggart Group, she was constantly surrounded by Alpha men more than capable, and willing, to lay down their life for her. But when she learns about a friend in trouble, she doesn’t hesitate to leave town without a word to her uncle to help. After several harrowing weeks, her friend is now safe, but the repercussions of her rash act linger on.

Chase Jackson, no stranger to dangerous situations as a captain in the US Army, has volunteered himself as Sadie’s bodyguard. He fell head over heels for the beautiful woman the first time he laid eyes on her. With a Delta Force team at his back, he reassures the Taggart’s that Sadie will be safe. But when her past catches up with her, Chase has to use everything he’s learned over his career to keep his promise…and to keep Sadie alive long enough to officially make her his.

Susan Stoker gives the instant heat with her installment of the Masters and Mercenaries crossover series with Rescuing Sadie. Get ready to sit on the edge of your seat, experience total alpha men doing what they do best and some excellent suspense!

Rescuing Sadie is a quick, thrilling read that engages the reader in so many way. Chase and Sadie had the instant lust/love that has that good ol’ slow burn that O love so much. Drama and action kept me turning the pages. Catching up with past friends is alway a pleasure. Susan Stoker packed a good punch with Rescuing Sadie.

A copy of this title was provided for an honest review.

Posted on April 19, 2018, in Uncategorized. Bookmark the permalink. Leave a comment.