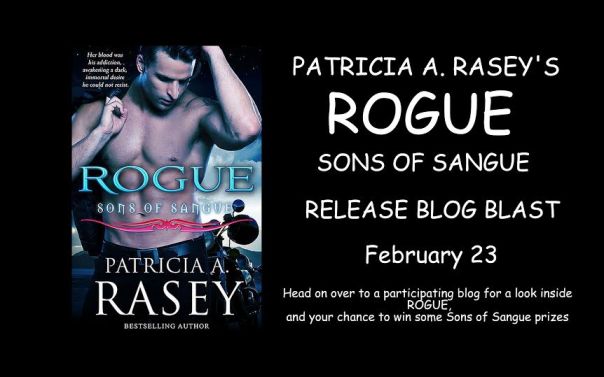 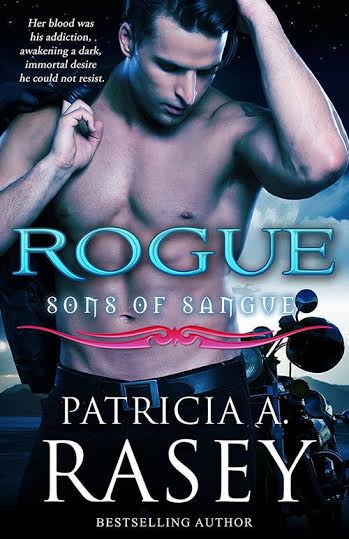 Vampire MC member Anton “Rogue” Balan, aka Blondy, has turned his back on the powerful Sons of Sangue, betraying the brotherhood he once considered his family. Or so his vampire brethren think. Changing his appearance, his persona, and signing up with rival gang, the Devils, Rogue has gone deep undercover to catch the La Paz Cartel’s kingpin. Having lost a woman he once thought he would spend eternity with, Rogue now feels he has nothing left to lose . . . that is until a temptation named Kimber James invades his dangerous world.

Strait-laced Kimber has a problem and his name is Anton Balan. After an impulsive night of passion with him more than a year ago, the small-town librarian still has the hots for the sexy biker next door. She can’t deny her desire for Anton, even though she suspects he’s hiding a secret even darker than his affiliation with an outlaw MC. As for Rogue, no matter how much he tries to refuse the scorching need he has for Kimber—as much as his duty depends on it—he’s powerless to deny his rising feelings for her. And when a blindside by an enemy he once trusted puts Kimber’s life at risk, Rogue’s tarnished honor is put to the ultimate test.

“You shouldn’t come here, Kimber. Ever. Do I make myself clear?”

With a roll of her eyes, she snorted. “This isn’t exactly my scene, Anton. Murphy’s Tavern is more my

“Good, then I’ll escort you over to that bar.”

Anton reached for her, but she took a step back. Lord, she didn’t need the extra stimulation his touch

caused. Just being in the same room with him had her naughty parts humming with unrequited desire.

Even angry he was all sorts of sexy. Kimber shifted her stance, trying to alleviate the ache centered in

the V of her thighs.

“Wolf or Xander?” he all but growled.

“Who?” Her voice rose, having had about enough of his surly attitude. He should be thanking her from

stopping the beating he was about to receive from those two buffoons.

“The two idiots at the bar you were cozying up to.”

“Lord, you’re either blind or stupid.” She ran a hand through her hair in frustration. What the hell did

she see in him? Plenty, her overactive brain reminded her. “I’m here with a coworker. She was on the

dance floor and I was about to order a drink.”

“You in the habit of letting strange men paw you?”

Oh, he so overstepped his boundaries. Her ire shot to the metal roof. “Not since you. I guess I should

thank you for curing me.”

Kimber thought she heard a slight chuckle, but the look on his face didn’t give way to any traces of

humor. “Just in case you might be wondering, I’m a much better fuck than Wolf.”

“The guy with the roaming hands? And you would know this because…” She let it hang in hopes he’d

elaborate. This ought to be good. She’d be damned before she’d feed his ego, even if he no doubt was

“You see any women hanging around Wolf before you arrived at the bar?”

“No, but that doesn’t mean anything. The night is early. He has plenty of time to pick up a date.”

“Looked to me like he was heading in that direction before I opened the door.”

“What about the woman you had in here with you?” Her forefinger indicated the orange sofa in the

corner. “I suppose you were offering her your services on that ugly couch.”

“As I recall, you didn’t complain about my servicing you.”

Her face heated, no sense in pretending he was wrong. The regret was that he’d turned into a Grade A

ass afterward and she hadn’t gotten a second sampling. “I had no complaints.” 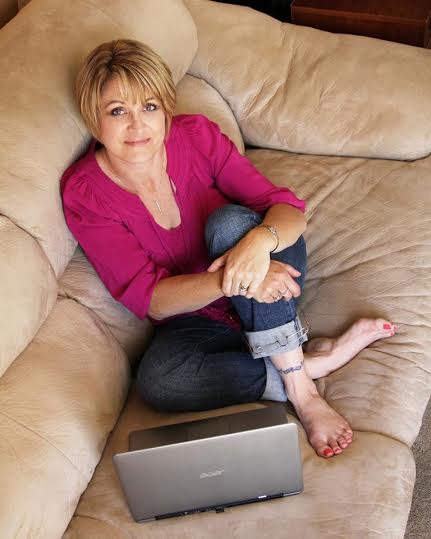 A daydreamer at heart, suspense author, Patricia A. Rasey, resides in her native town in

She has two adult sons she is extremely proud of and are actively making their own paths in life.

At the age of twenty-nine, her boys both tucked away in school all day, she decided to put her

creative writing studies to use. A graduate of Long Ridge Writer’s School, Patricia has seen

publication of some her short stories in magazines as well as several of her novels.

Ms. Rasey is a three-time recipient of the Word Weaving Award for Literary Excellence and a

three-time winner of the prestigious RIO Award Of Excellence. She is also a three-time EPPIE

finalist and was a 2001 nominee for Romantic Times Magazine’s Best Electronic Book.

Additionally, Twilight Obsessions and Twilight Visions, two anthologies she was a part of, was

nominated for the PEARL, the Paranormal Excellence Award in Romantic Literature, in the Best

Anthology category. Her short story, In The Mind of Darkness won the P&E 2002 Horror short

When not behind her computer, you can find Patricia working, reading, watching movies or

MMA. She is currently a third degree Black Belt in American Freestyle Karate.