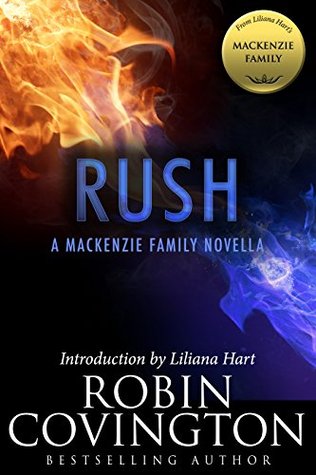 Atticus Rush doesn’t really like people. Years in Special Ops and law enforcement showed him the worst of humanity, making his mountain hideaway the ideal place to live. But when his colleagues at MacKenzie Security need him to save the kidnapped young daughter of a U.S. Senator, he’ll do it, even if it means working with the woman who broke his heart …his ex-wife.

Lady Olivia Rutledge-Cairn likes to steal things. Raised with a silver spoon and the glass slipper she spent years cultivating a cadre of acquaintances in the highest places. She parlayed her natural gift for theft into a career of locating and illegally retrieving hard-to-find items of value for the ridiculously wealthy. Rush was the one man who tempted her to change her ways…until he caught her and threatened to turn her in.

MacKenzie Security has vowed to save the girl. Olivia can find anything or anyone. Rush can get anyone out. As the clock winds down on the girl’s life, can they fight the past, a ruthless madman and their explosive passion to get the job done?

Atticus Rush is a jaded, ex special forces turned mercenary and security contractor.  Hes is a hard, take no prisoners, push you to the edge type of man. All alpha and is able to get what he wants, how he want it. A man not to be messed with. His personal demons weigh heavily on his psyche. His exquisite body, quick tongue and no nonsense ways leave readers in thrall of Atticus.

Olivia -Livvy- Rutledge-Cairn is one kick ass lady.  Born a princess Livvy found within herself a skill set make her a Master Thief. There is nothing this woman can’t track down and fine. She’s as beautiful and sexy as she is cunning and dangerous. This sensual woman can more than handle herself.

Robin Covington’s contribution to the MacKenzie family will have your pulse racing and breathless with desire.  Livvy and Atticus have a history with some up and down and ton of combustible chemistry.  A tortured, broken hero and woman that’s just as strong as he is. Both alphas and commanding in their own right.  And both get to each other like no other.

Rush is a fast paced novella that hit you in all the right spots. Action, suspense, and intense passion. Robin Covington gave readers an intense hit to the romance pallets with Rush!

Review copy was provided by the author/publisher for an honest review. Receiving a complimentary copy of this title does not affect the outcome of the review.