Review: One Night With A Santini by Melissa Schroeder 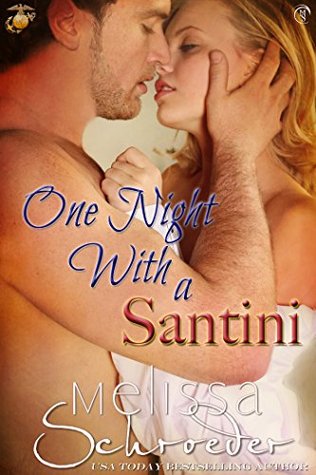 One Night With A Santini

He was searching for something that was missing from his life.

Brando Santini is headed to New Orleans to blow off some steam with a few of his buddies. The respite from his life as a Marine doesn’t really seem to do the trick until he runs into his college crush, Kaitlin Fitzpatrick. After a little dancing and a few drinks, they end up in bed together and Brando knows she’s the one for him.

One night will never be enough.

Kaitlin never forgot Brando. She never would have thought the sexy nerd would have remembered her. More than that, she definitely didn’t expect he would be interested in seducing her. Their time in New Orleans is intense but much too short. The memories of his lovemaking leave her counting the days until she sees him again.

A complication neither of them expected.

By the time Brando arrives in Maryland, Kaitlin suspects that their one night together has left them with more than memories. When Brando insists on marriage, she refuses on the grounds he doesn’t love her. But what Kaitlin doesn’t understand is that when a Santini wants to prove his love, nothing will stand in his way—not her five brothers, his own annoying family, or even the woman he adores.

I truly adore the Santini series. There is nothing like the moment when a Santini man stumbles over his self when he realizes she’s the one. Then watching (reading) what these tough, sexy military men will do to prove their love.

Brando and Kaitlin have harbored secret crushes on one another for years. A chance meeting, an amazing night of passion, a stubborn woman and the Santini curse. Leaving more than longing and memories. Giving this reader just what I love about a Santini book.

Brando and Kaitlin’s chemistry sets this novella on fire. Melissa has this amazing way of writing couples that are perfect for each other. Giving each distinctive personalities and charisma, that you can’t help but to like. Humor, meddling families, insatiable passion and romance make you fly through the pages. The Santini Family will suck you into their world!
Readers note: I got a very strong feeling while reading One Night With A Santini that Mel is hinting around at some thing. Maybe spin off to another series. Maybe a prelude to something. I could be wrong and just imagining it. However from what I read it feels like something good is coming.

A review copy was provided by the author/publisher for an honest review.