Review: Playing with the Drummer by Robin Covington 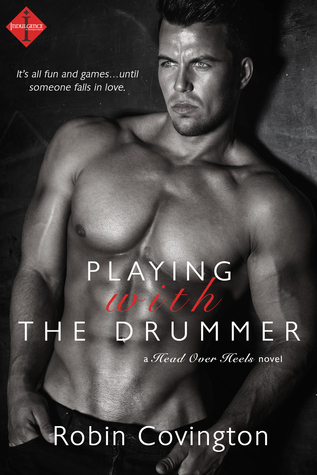 Playing With The Drummer

Entertainment journalist Lita Matthews is on the verge of making it big. As in her-own-TV-show big. She just needs amazing inside scoop on the year’s hottest celebrity wedding. Instead, her big break is becoming a big nightmare—all thanks to rock star Rocky Cardano. Who apparently hasn’t gotten over what happened between them four years ago… Rocky is pretty damn familiar with just how far Lita will go for a “scoop.” Hell, their unbelievably hot hook-up in Mexico years ago was the story of a lifetime. Rocky’s learned his lessons. He’ll do whatever it takes to keep her from the story—even if he has to seduce her to the point of distraction! But Lita has always had a way of getting under his skin. Only this time, he won’t be able to just walk away…

Seventy-two hours of uninhibited lust and passion with a nameless person who sparked your body in all the right ways, sounds almost too go to be true.  True enough to rock the foundations of both Rocky and Lita.  Until the moment that names come to the faces that had them ripping their clothes off.  Changing lust for anger in a split second, leaving a lot of harmful words and deeds in wake of something that left a lasting impression soul deep.  Fast forward four years, Rocky and Lita skate around each other in social settings, while harboring both animosity and underlining desire.  When paired together for friends wedding has both heads and clothes flying.

Lita loves the spotlight. Being the daughter of Hollywood and an entertainment reporter she knows all too well how the game is played.  Being presented with an opportunity to fill her dream puts her in an awkward position.  She surprised me by not being a ruthless, cut throat reporter. She has a sense of dignity and pride in what she does. She adds a bit of class to world that can be very ugly.  She’s a true friend. She went out of her way, above and beyond and even surprise me by sacrificing something I didn’t think she would.

Rocky is the the hottest recluse known to man. Drummer for an amazing rock band who’s always in the media spotlight, Rocky prefers to sit behind his kit, playing music.  He’s known for his dislike of reporters. Rocky will avoid them at all cost. He has his reasons. A private man who is fiercely loyal to those he cares about. Sexy, headed and protective, Rocky won my heart from the very beginning.

The chemistry and sexual tension between Rocky and Lita set the stage for this quick read. Tempers flair, passion flow and a few people learn who they really are and what they want in life.  Playing with the Drummer hits the spot for a good Rocker Romance.