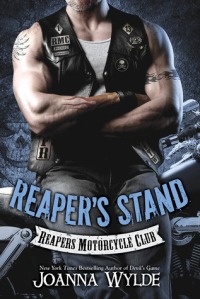 As Reapers Motorcycle Club president, Reese “Picnic” Hayes has given his entire life to the club. After losing his wife, he knew he’d never love another woman. And with two daughters to raise and a club to manage, that was just fine with him. These days, Reese keeps his relationships free and easy—he definitely doesn’t want to waste his time on a glorified cleaning lady like London Armstrong.

Too bad he’s completely obsessed with her.

Besides running her own business, London’s got her junkie cousin’s daughter to look after—a more reckless than average eighteen-year-old. Sure she’s attracted to the Reapers’ president, but she’s not stupid. Reese Hayes is a criminal and a thug. But when her young cousin gets caught up with a ruthless drug cartel, Reese might be the only man who can help her. Now London has to make the hardest decision of her life—how far will she go to save her family?

When I first met Picnic in Reaper’s Property I knew this man was a force that you would never want to tangle with but more than wanted on your side.  Reese “Picnic” Hayes,  President of the Reaper’ MC. How do even begin to describe this man. I thought that Horse was an ass, Rugger, a man whore and Hunter really kind crazy. Picnic has nothing on the three of them combine. Intimidating and scary as hell. A loyal brother and a true leader.  Picnic eats, sleeps and breaths the MC. It’s his life.  Having raised two grown daughters who keep him guessing and losing his wife to early in life give Picnic another prospective added into his MC way of life. Under the layers of sexy, make you melt, badass biker is a good hearted man, who could kill you as fast as like you.

London is either one bad ass woman or straight up bat shit crazy. At times it hard to tell which.  My favorite female lead character that I have read this year!  Strong, self sacrificing, hard working and ever giving.  Caring for her cousins daughter with major medical needs has kept her social life on hold for many years.   London doesn’t know what hit her when the hot, blue eyed devil that is Picnic pushes his way into her life.  Overwhelming lust and a way of life that London doesn’t understand.  In a matter of a week life is changed, flipped upside down and twisted causing London to make some rather brave, rash and ballsy choices. Choices that have consequences that leave London hanging on the edge with the rock crumbling away no matter the decision. Knowing her actions will carry retribution, she does it knowing full well what the end result could be. A remarkable woman in so many ways.

Everything Reaper, yet different from the previous books in the series. Intimidating, aggressive and carnal. Ms.Wylde not only knows how to catch a reader attention, she knows hold to keeps us holding on. Intense is too light of a word for Reaper’s Stand.  I laughed, I cried,I cussed.

Euphoric rage, loyalty and family set into motion a ride that is sure to be remembered. The Reapers have a motto of “Fuck with us and we will fuck you back, harder.” Reaper’s Stand gives the fans of this series a first hand look just that. Deeds done that will drop your jaw, entwined with blinding lust that exceeds any my of expectations for this book.   Reaper’s Stand pushed the line further than any of the previous book.  Intense and overwhelming, everything I love about the Reapers and more. Picnic and London are both mature, having lived life and have both suffered loss.  The two are given the chance to fill the thing lacking in their lives if that make it far.

I could keep going on and on trying to find the words to express how much I liked this book.  If MC romance is your thing or you like a raw aggressive edge to your steamy reading, Reapers Stand is the book!  Be warned this is not a sweet, romancing, lets fall in love book.  It’s a balls to the wall, take what you want kind of book that will make your skin tingle. A scary ride that I want to go on again.

I received an ecopy of this book from the author/publisher via netgalley for an honest review.